Mihály Munkácsy is among the iconic Hungarian artists whose life and art impacted his whole generation. The legacy of his paintings and technique elevated him to remarkable international renown and is considered an essential influence even today.

Born in 1844 in the city of Munkács as Mihály Leó Lieb, the young Munkácsy was trained initially to become a carpenter but soon his affection towards fine arts became apparent. In his 20s he was already an itinerant painter: wandering the Carpathian Basin and painting portraits, restoring old paintings and murals. To advance his technique and artistic understanding he travelled to Vienna first, then Munich and with the support of a fellowship of the Hungarian Government in 1867, he reached Paris during the world’s fair. 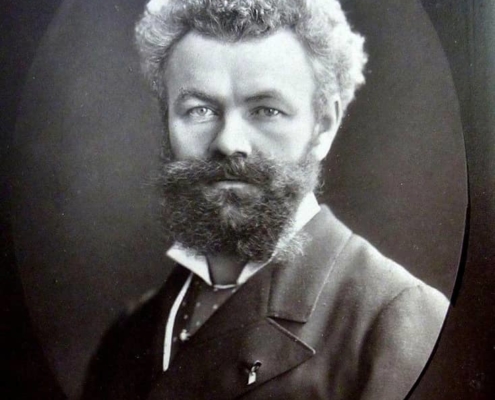 After taking the name of his home town as his own, first, he became the student of the realist painter, Gustave Courbet, then moved to Düsseldorf to work with Ludwig Knaus. These were to most transformative years for the young Munkácsy as one of his most iconic works was created during this period. The painting “The Last Day of a Condemned Man” in 1869 is considered as the masterpiece of Munkácsy and made the painter famous in an instant. It portrays oppression, moral uncertainty and looming tragic in a unique and unprecedented visual form. 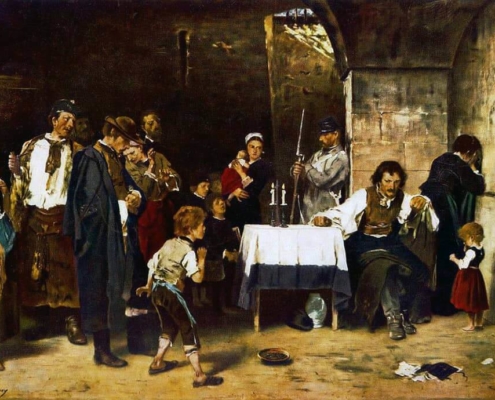 During his later years, Munkácsy created three paintings, later called the Trilogy, that placed Munkácsy in the pantheon of the most influential painters in the world. In 1882 he painted Christ in front of Pilate, followed by Golgotha in 1884 and later, in 1896 Ecce Homo. The paintings of three significant and defining scenes from the Bible were displayed in Paris, Vienna and Budapest and his exhibitions attracted thousands. His works transformed genre art – the pictorial representation of scenes or events from everyday life – significantly and Munkácsy is still considered as one of the pioneers of the field. 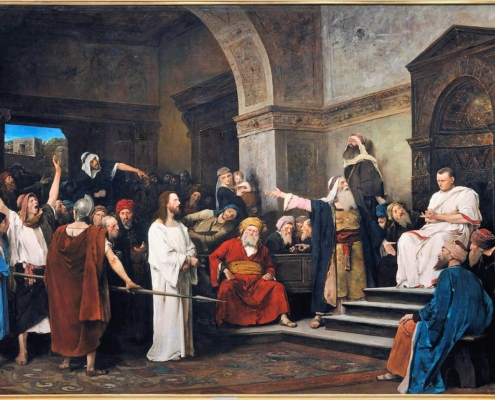 During his last years, he created two monumental works: the Hungarian Conquest for the Parliament building in Budapest and a fresco, Apotheosis of Renaissance for the ceiling of Kunsthistoriches Museum in Vienna.

His legacy cannot be disregarded: not only Hungarian art but 19th-century visual art can only be interpreted while discussing the contributions of Munkácsy. His art is the pinnacle of national painting and later became the standard of the genre. The antiquated colour technique of the 19th century had its most powerful period with Munkácsy. You can marvel at his work and art even with your own eyes for Hungary has multiple paintings of Munkácsy. For instance, on his 175th anniversary, the Mihály Munkácsy Museum in Békéscsaba opened a new exhibition from his works and the Hungarian National Gallery also has an exhibition with the selected works of Munkácsy which you can check out even online.

Four Hungarian movies to watch this week
Scroll to top
Manage Cookie Consent
We use technologies like cookies to store and/or access device information. We do this to improve browsing experience and to show personalized ads. Consenting to these technologies will allow us to process data such as browsing behavior or unique IDs on this site. Not consenting or withdrawing consent, may adversely affect certain features and functions.
Manage options Manage services Manage vendors Read more about these purposes
View preferences
{title} {title} {title}