Colourful springtime tradition in Hungary – The May tree

Traditions are building blocks of communities. Although some of them can’t fulfil their original intentions anymore, there are a handful of Hungarian traditions that are still alive to this day, and even adapted to a more hectic city life routine. Springtime traditions are often centred around the renewal of nature and love. Today we are revealing the origins and meaning of the most colourful tradition of Hungarian springtime: May trees.

The branches of spring

Have you ever had the chance to spend the first day of May in a small Hungarian village? If so, chances are that you’ve seen a strange phenomenon – colourfully decorated trees popping up overnight in front of seemingly random houses. Have you ever wondered, what they meant? The answer is the same today as it would have been hundreds of years ago: springtime is here and a girl being courted.

This tradition of many centuries has unclear origins – the first mentions of decorating doors with green branches for Pentecost dates back to the 15th century. It was widely spread across the different regions of Hungary and is still present in our time. Although there are springtime celebrations across Europe with similar motives, such as dancing around a colourfully decorated maypole, the may tree seems to have a unique Hungarian touch to it. 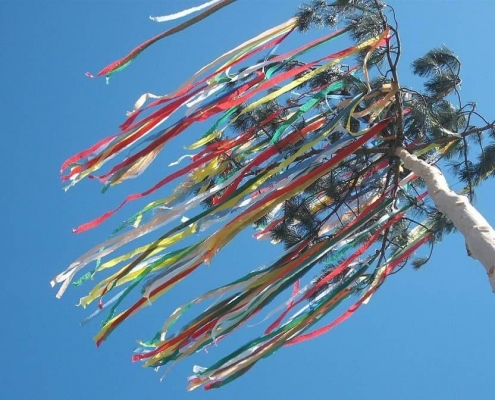 Setting up the tree

As tradition goes, a group of young men gather on the last night of April, heading to the nearest forest to find a suitable tree – usually a young birch. The trunk of the tree needs to be cleaned, leaving only the top crown, which they decorate with colourful ribbons, fruits, and sweets. Oftentimes they place little gifts on the branches too: a hand mirror or a comb was seen as a particularly useful and romantic offering. The decoration process is finished by tying a bottle of wine or pálinka to the top of the tree. As the last step, they get to erect the tree with the help of ropes and ladders. This was by no means an easy job to do: these trees could reach up to 8-10 meters and the whole process had to be done in complete darkness not to spoil the surprise. Once the tree was standing, proud and colourful, it was up to the girl to give an answer. In most regions, lighting a candle in her window was a signal of acceptance – both of the tree and the courtship that came with it.

Although these days may tree mostly have symbolic meaning to them, in the past they carried a more practical significance too. They proved that the intentions of the courting man were genuine so those who went through the ordeal could later ask for a rendezvous or go dancing with their chosen ones. Since most villages had very strict rules about young men and women spending unsupervised time together, this tradition offered a leeway for the couple to meet up more often. Setting a may tree however could also send a darker message: placing a dried-out bush or tree trunk “decorated” with old shoes and rags to the front door of a girl who had been cruel to them was not unheard of.ű 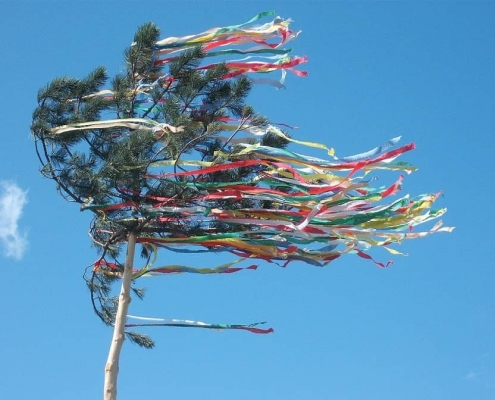 ‘Dancing out’ the may tree

Bringing down the may tree was usually followed by a community feast. Dancing, climbing the tree in hopes of claiming the drink on top of it, singing and dancing around the tree. It often lasted the whole night and during this ‘dance out the owners of the tree – either the parents of the girl or if the tree was set in a public space, the owner of the pub or café- provided food and drinks to the guests.

A modern twist – may basket

Although offering a may tree is a beautiful gesture (and an aesthetically pleasing one, too) it is far from being sustainable. To keep the spirit but minimize damage as well as to make the tradition available in bigger cities too, courting men started to gift “may baskets” to their chosen ones. Similarly to the trees, these baskets are filled with little gifts and are decorated with colourful ties and ribbons. This tradition is relatively new, but it’s gaining popularity, especially in bigger cities.

The innovation and medical hub of eastern Hungary – the University of&nbs...

Understanding Hungarian Higher Education
Scroll to top
Manage Cookie Consent
We use technologies like cookies to store and/or access device information. We do this to improve browsing experience and to show personalized ads. Consenting to these technologies will allow us to process data such as browsing behavior or unique IDs on this site. Not consenting or withdrawing consent, may adversely affect certain features and functions.
Manage options Manage services Manage vendors Read more about these purposes
View preferences
{title} {title} {title}