Busójárás – A Hungarian tradition celebrating the coming of spring

The UNESCO-recognised event lasts approximately for one week in the small town of Mohács, located in southern Hungary, near the city of Pécs. Although this year’s carnival was cancelled due to the pandemic, you can always learn more about Busójárás, one of the most famous Hungaricums.

The ritual of Busójárás lasts for 6 days and it is organised at the end of the carnival season, in Hungarian called Farsang late February. During the carnival, we bid farewell to winter and the Busós scare away the cold weather, while we also celebrate the coming of spring, fertility and rebirth. During the event, you can choose from several programmes such as creative workshops, masquerading, folk dance and music performances, or bonfires, while you can also explore traditional Hungarian cuisine by trying spicy sausages, freshly-made mini doughnuts, lángos or chimney cake. 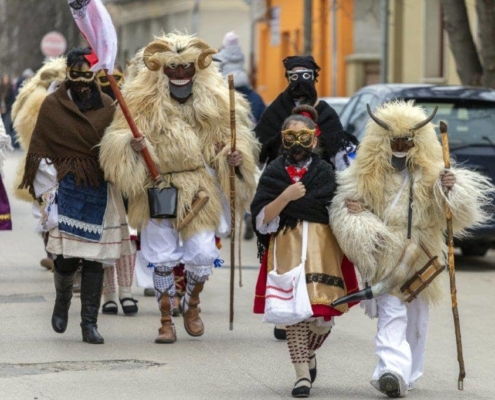 The legend of the Busós

Busós are traditionally men wearing scary costumes, unique wooden masks and woolly cloaks made of sheepskin. They like to chase around and circulate among the crowd while pulling pranks and making a big noise as a symbol of scaring winter away. Although most Busós are men, women also participate and they dress up as female Busós, or they wear costumes reminiscent of female Ottoman Turks.

But why the Ottomans exactly? A legend holds that around the 16th century, the local Šokci people (a South Slavic ethnic group from Croatia) fled from Mohács to the nearby swamps and woods to avoid the Ottoman troops. One night an old man appeared and came up with the idea of creating scary, fearsome masks and make rattling and clattering objects to scare away the Ottomans. At night, the Šokci crossed the river Danube with their boats and chased the Ottomans away. Despite the fact that the story has no real historical foundations, the legend of busós is still very popular among the townspeople.

Mohács is a significant place in Hungarian history because two major battles were fought here. One of them was in 1526 which marks the beginning invasion of Hungary by the Ottomans. The other significant battle took place in 1687, which was the prelude to the collapse of the Ottoman Empire. 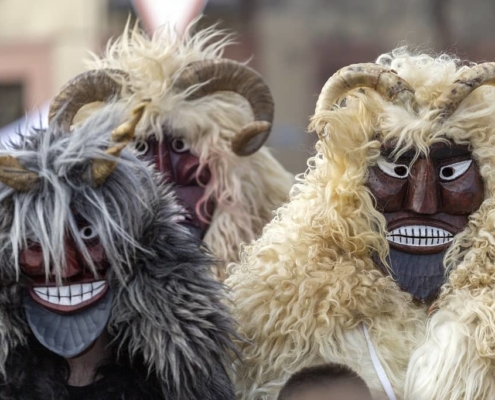 In ancient times, busós walked from house to house to express their good wishes, practice magic and, in exchange, to receive drinks and food gifts. Today, most of the folk custom’s origin has lost but has gained with numerous other attractions. It is a real End-of-Winter festival with such events as the crossing of the Danube in large ferry boats or the sinking of Old Man Winter’s coffin in the river.

One of the main events of the carnival takes place during the penultimate night of the festival when a straw man is carried into the centre of Mohács and burned in a bonfire, while the townspeople hold hands and dance around the fire. The event also includes children’s costume contest where children busós can also have fun and wear carved masks. The festival usually draws about 800 busós and 200 revellers in other types of costumes during the event.

As you can see, busójárás is indeed one of the most famous spring carnivals in southern Hungary. Although this year’s carnival was cancelled, in 2022, hopefully, we can celebrate the arrival of spring together with the busós again, say goodbye to the cold season and welcome the arrival of spring!

Reboot your roots at the University of Veterinary Medicine Budapest!